Amix was retained by AGI Foundation Contractors Inc., to design and build a high capacity colloidal grout mixing plant that could provide the quality and quantity of grout needed to keep their soil mixing operation running at maximum production.

The Rapid Transit Line, a $1.43 billion project, is 11 km in length with elevated, at-grade, and underground sections with seven stations. AGI Foundation Contractors performed deep soil cement mixing to stabilize soft soils along a portion of the alignment.

“Our project required large quantities of high quality grout and we needed a grout plant that was compact, easy to set up and move and low maintenance. Amix designed a plant which contained features that we hadn’t originally envisioned but that turned out to be extremely useful, including remote controls and self-cleaning capabilities.” – Sean Callen, AGI

Amix provided a conceptual design and built a custom high shear colloidal mixing grout plant that included manufacturing a skid mounted grouting system. The plant was built off-site and delivered to site in an easy to set up modular design. The Amix plant is an extremely accurate grout system producing high quality, on-demand grout. Additional features of the batch plant include it’s self-cleaning function allowing for low maintenance and little down time, as well as incorporating a remote application allowing for seamless grout flow control at the soil mixing rig. 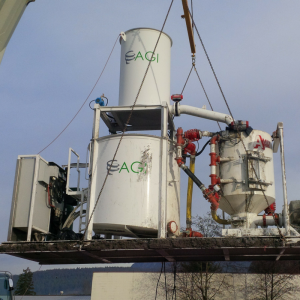 “The plant consistently produced high quality grout mixes within specifications with no waste, and it required less operator intervention than other comparable plants we have in our fleet. The plant was highly mobile; it could be relocated and running again within one day using a 4-man moving crew.”- Sean Callen, AGI

With over 20 years of manufacturing, design of mechanical and electrical systems, commissioning, and a leadership background in management and sales. Dennis has hands on experience in mixing and pumping of various applications such as jet grouting, soil mixing, tunnel boring two component backfill grouting and many others.